On sale at the Pro Loco Lamon and other shops in Lamon. 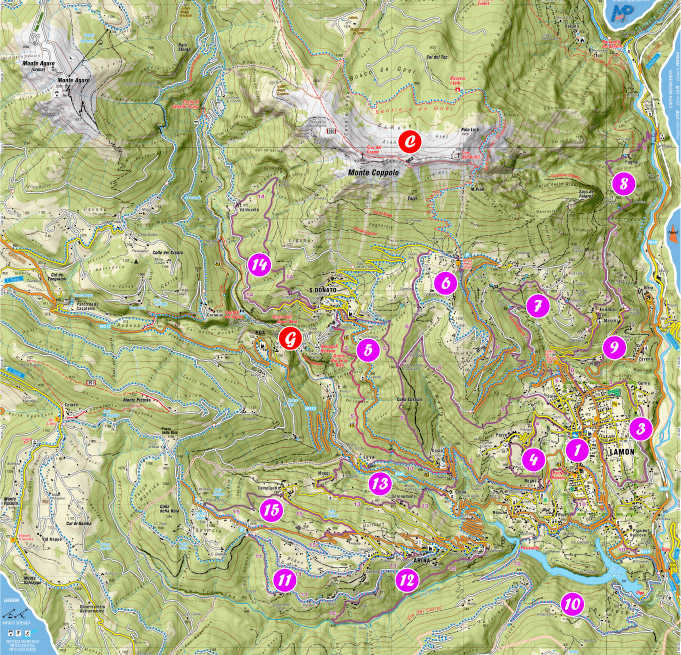 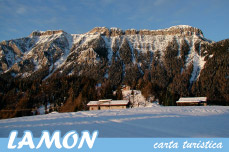 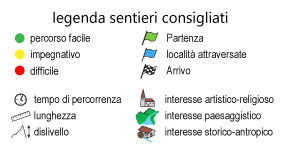 This short but interesting itinerary leads back to the origin of the community of Lamon, which developed itself around an ancient fortress built by the Romans in the 1st century AD to defend the military road Claudia Augusta. Some historians speculate that on the hill of S. Pietro there was also a small temple dedicated to the Roman god Jupiter Ammone from which the name of the village derives, whereas others assume that the name ‘Lamon’ has Etruscan origins. In the early Middle Ages, a chapel dedicated to St. Peter was built on the ruins of the fortress which had by then lost its strategic function. Over the centuries the church has been enlarged and enriched with decorations, an organ and paintings, among which stands out a painting by the artist Pietro Marescalchi. Before climbing the hill you can also admire the exteriors of the recently restored church of S. Daniele.

This easy and relaxing trail develops through clearings and woods. Green trees in the forest of spruce and hazelnut trees and honeysuckles in the undergrowth offer protection to many wild animals ( foxes, martens, dormice, hedgehogs and nocturnal birds of prey). Leaving the town center behind you, follow the road Vallina until crossing a dirt road on the left. From here proceed on this road to the plain of Gorna , the capitello of S. Antonio and then back to the centre of Lamon in about 15 minutes.

Behind the hill of S. Pietro visitors will find housing units, fields and plantation that shape a landscape of great value. Once in Rugna, continue along the ancient Via Claudia Augusta that descends to the recently restored bridge over the Stalena stream. The last part of the trail, flanked by a beautiful hedge, leads visitors back to the town centre.

This itinerary is very interesting both for researchers and history enthusiasts. Following the directions, this trail takes you from the square to Pian di Sala. It is assumed that this extensive erosion surface was formed during the glaciations (ice age). The path approaches the slopes of M.Gial and proceeds towards the Val Maggiore. It then descends towards the hamlet of S. Donato, where the numerous findings testify the antique presence of a Roman settlement. Between the Drosere and the Colle Furlan rose a manor used to defend the military road Claudia Augusta (also called Via Pagana) on the first century A.D.. This road facilitated the cultural exchange between different peoples, who later came together in the community and "Regola" of Lamon.

This trail connects the village of Lamon with Ej. The path, which at times resembles a trench in the crumbly red rock, takes the hikers at an high altitude. Visitors have the opportunity to enjoy a traditional meal and even decide to spend the night up here in a relaxing atmosphere. It’s the ideal place for nature and history lovers, since evidence of ancient human activity have been found in this area. The surrounding meadows are covered by a rich vegetation that changes according to the different seasons. After the majestic beech trees of "Capelli", the path follows the ridge of Costino (crossing the path n.5 for Pezzè) and finally reaches the locality of Costa.

In the old written code ‘La Regola di Lamon’ (1330), it was mentioned "la Righ", a long canal that from the Rio Molina descended crossing the center. Starting from the bridge over the Molina, the trail intersects several times the road to Le Ej until the deviation for Valdalanga, a forest road leading to a large clearing with cottages. The many cabins and houses indicate that the territory was intensively exploited. The locality of Scheid, where wide meadows and old beech hedges alternate, is the ideal environment for roe deer and hares.

This hike can be extended to the further hamlet of Bellotti. In ancient times this trail was a mule track which connected our territory to the valleys of Vanoi and Primiero. From the Val Molina reach the locality of Furianoi through different short cuts and then follow the path which winds above the Cismon valley. From here on tou will enter into the provincial oasis of the "Conserlo" which covers the eastern side of the Monte Coppolo. Once passed the rocks and beech woods, cross with caution the landslide to arrive to the locality of Pugnai. This hamlet preserve the charm of the ancient mountain settlements even if the forest is now invading the meadows and terraced fields, which were fundamental in the past when people still lived here . Then follow the direction for Val Rosna, where a bus service will take you to Ponte Oltra or Ponte Serra.

This easy trail introduces visitors into a natural environment characterised by terraces, originated during the ice ages, that rise on the right bank of the Cismon valley. Continuing along the road visitors reach the sunny district of Maschi, which in the past was inhabited by expert woodcutters who worked in the largest forests of Europe. The hamlet of Furianoi is located in a panoramic position. The streets connecting these districts to the centre have been built when most of the population had already moved elsewhere.

10. Tour of the Lake Senaiga

A beautiful circular trail that crosses different environments. Starting from the town centre, this trail descends towards Ponte Serra. The bridge over the Cismon was built during the construction of the road connecting Fonzaso to Primiero in 1882 while, just a little below, there was a bridge dating back to the Middle Ages. After passing through a small tunnel, visitors will find themselves above the artificial barrier on the Senaiga ( 62 metres high), built between 1949/51. After the dam, the forest road dominates a stretch of the lake. Here the luckiest can spot mallards and grey herons. Continuing along the road, visitors will reach the locality of Prese, a well maintained grassy slope occupied by some cabins. An opening in the trees shows the plateaus of Lamon and Sovramonte dominated by the Monte Coppolo and the Vette Feltrine and in the background, between these two, the Pale of San Martino and the group of Lagorai. Going down to Vapora, visitors reach the gangway on the Lake Senaiga. From here visitors can reach the town centre in about 40 minutes.

The Chiappini are a wonderful example of isolated human settlements. Today a comfortable road allows visitors to reach this place with no struggle, but just try to imagine which kind of isolation and difficulties their inhabitants endured until 1945. Today no one lives here anymore. From the church of Arina, the trail proceeds left towards the "solivi". In just 30 minutes’ walk hikers arrive to the charming district of Piloni. In other 15 minutes and after the "Col Sec", the hamlet of Chiappini shows all its beauty; even if only 930 metres a.s.l., the landscape resembles that of the highest summits . From this position, looking beyond the valley, visitors can enjoy the restful panorama of Cima Campo and Cima Lan.

Following the path to the Chiappini visitors can appreciate the important work of terracing carried out in the past centuries. Cereals, vegetables, legumes, vineyards and orchards were cultivated in these patches of arid land supporting entire generations. But the most important activity was the transhumant pastoralism; until the 40s dozens of families were still dedicated to this activity. After 20 minutes, once left the road for the Chiappini, visitors reach the two districts of Gai, small groups of traditional houses built above the Valpora. Once reached the valley floor, the path turns left and becomes particularly evocative, running between red rocks and crossing the gorge of the Valpora. After other 20 minutes, hikers reach the detour to the Stue and the Valpora gorge, from where it is possible to reach the Tecia (large erosion container situated under a small waterfall). For this detour hikers must be careful and well equipped! Le Stue or Portoe, built at the end of the 19th century, are stone and wood dams with large doors able to make the wood flow from the woods of Pezza to the sawmills. Staying on path n° 12, in 40 minutes hikers arrive in Vettorelli and on the road leading back to Arina.

From anywhere you look at it, the hamlet of Costa is really picturesque. The beginning of this trail is that of the ancient Roman road then, once in front of the Christ in wood, hikers need to turn left in order to reach the locality of La Val in about 30 minutes. This hamlet resembles the ancient medieval villages. Following the main street, visitors arrive to the bridge built over the Senaiga and taking the right path they can reach in 30 minutes the district of Moggi. Going in the direction of Arina, the path descends to the locality of Geronemoni and then to the old sawmill Tomasini, which towers over the Senaiga. After the bridge the trail continues towards the hamlet of Chioè, a small fertile and still well-cultivated terrace.

From the center of the picturesque district of San Donato, passing in front of the former school and the recently renovated dairy, hikers reach the hamlet of Tomii. Here it is located the beautiful wayside shrine built in 1860 and dedicated to S. Rocco after the cholera epidemics of 1836 and 1855. From the construction, an old and partly paved mule track leads to the "Col del Vent" and then to Valnuvola. Characteristic is the arrangement of the houses in this district, an inhabited center between the territory of Feltre and the region of Trentino. Returning to San Donato, near the "Col della Cros", visitors will observe two stone quarries used for the construction of the bell tower of San Donato and the Duomo of Lamon. Finally, hikers will reach the suburb of Sartor which overlooks the deep and mysterious valley of Senaiga with its legends, caves and waterfalls.

In 1945 in the district of Arina there were 1700 permanent residents, today there are just 500. These numbers show the dramatic social, cultural and environmental collapse that hit this corner of land between the valley of Senaiga and the wild Valpora. In good weather visitors can enjoy a breathtaking view: the Agaro and the Lagorai mountain chain, the Monte Coppolo and the Vette Feltrine and on the south the woody ridge of Cima Campo. The hamlet of Campigotti has ancient origins which date back to a settlement of Ostrogoths arrived here in the 500 A.D.. Despite its position this was the most populated part of Arina. From here, following the path, hikers reach the Totti on the slopes of the Col della Baìa between woods and meadows. After passing the ancient tavern of Cavalea, visitors arrive to the meadows and cabins of Braus to enjoy an amazing view. During spring and summer the meadows are covered by wild flowers, some of which are protected species.

The itineraries follow the mountain paths found on the area. This medium-difficulty hike includes more challenging part along the peak of Mt. Coppolo and ends on the summits of the mountain (Cros del Copol and Cros de l'Archil). This path is more demanding than the previous ones reaching an altitude above 2000 metres and offering a 360 ° breathtaking view on the plateaus of Lamon and Sovramonte, the Valsugana, the Lagorai mountain chain, the Vette Feltrine, the Pale di San Martino and the Grappa Massif. Hiking clothes and mountain boots are recommended for this excursion. The paths leading to the monument dedicated to Jòzsef Kiss are also signaled.