From an artistic point of view, in the town centre are located two precious masterpieces : the church of San Pietro, located on the hill of S. Pietro and the former church of San Daniele, deconsecrated in 1959.

The church dedicated to St. Peter, patron saint of Lamon, dates back to the early Middle Ages. During the centuries the building underwent many renovations, which shaped its simple and linear external structure. The interior is divided into three naves and a polygonal choir. There are two sacristies. The church is enriched with works of art datable around the XVI - XVII centuries. There are frescoes by Marco da Mel, works by Marescalchi and seventeenth-century paintings attributed to the painter A. Zocco. On the right side altar it is possible to observe an artwork by F. Frigimelica representing the Madonna and Child with S. Giovannino. Recently the XVII century organ of Callido has been restored. 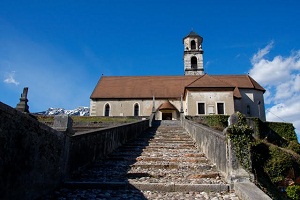 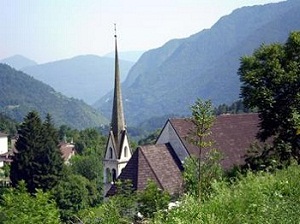 At the foot of the hill of S. Pietro stands the church of S. Daniele. Some sources seem dating the construction of the building in the first decades of the seventeenth century on an already existing chapel, attested for the first time in 1529. With a basic structure but more impressive if compared to the size of the previous one, it differs for its single vaulted ceiling. The most striking and interesting feature of the church is the bell tower, built following a typically Nordic construction style. The art works, removed after the deconsecration, consists of a series of frescoes by the painter G. Moech and the Deposition attributed to the painter F. Frigimelica. Some of the paintings are now kept in the church of Sacro Cuore whereas others are stored in the rectory's depots. After a conservative restoration, nowadays the church is used as a venue for exhibitions and concerts.