The Via Claudia Augusta

Lamon can boast the transit of one of the most spectacular and evocative stretches of the Via Claudia Augusta.
From the Cismon stream, the Via Claudia Augusta proceeds on the left of the valley towards the plateau of Lamon pointing directly towards the hill of S. Pietro, where a church dedicated to the saint stands on the old remains of a castle. Near this area, many Roman coins and objects dating back to the Roman period have been found over the years.

In the locality of Stalena, not far from the centre, is situated the remarkable "Roman Bridge" . In a natural setting of rare beauty and evocative suggestion and thanks to a recent restoration, it recalls a distant past when the legionnaires of the Roman Empire walked along this road to reach northern Europe.

Starting from the locality Costa visitors can walk along the beautiful stretch of the Via Claudia Augusta, named "Via Pagana", which consists of four uninterrupted kilometres carved into the rock. What remains of the original road is the profile, perfectly defined in some sections, whose dimensions vary from 180 to 200 centimetres. Military routes, very different from the "viae silice stratae" that crossed the large inhabited centres, were built on a solid structure of wood, stone and sand with a gravel surface and were called "viae glara stratae". 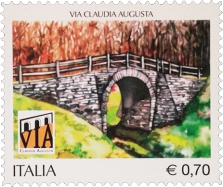 On May 2, 2014, a stamp dedicated to the Claudia Augusta was issued on the occasion of the 2000th anniversary of the death of the Imperator Augusto, the greatest inspirer of this Roman road which links Altino, in the Venetian lagoon, with the Bavaria. Built for military purposes, today it represents a potential cultural and tourist resource, object of important international promotion projects in Bavaria, Austria and Italy.
An historic road, 3 States, 5 European regions, 550 km. Its ancient and modern vocation of union has found a representation in the commemorative stamp representing the bridge over the Stalena. More than 2,750,000 copies have been printed and they can be bought for 0.70 cent each.

The Via Claudia Augusta

The Claudia Augusta is an ancient imperial road begun by Nero Claudius Drusus, the Roman general of Emperor Augustus, after the conquest of the territories of Rezia and Vindelicia (West Tyrol and southern Germany) in 15 BC. The Claudia Augusta "Altino - Augsburg" was a 350 Roman miles road (about 520 kilometers) which connected the Adriatic sea with the river Danube. Its path linked through the Alps the Municipalities of Altinum, ancient lagoon port , with Augusta Vindelicum. The name Claudia Augusta is due to the name of Emperor Claudius, son of Drusus, who completed the road as testify by the milestones of Rablat (BZ) and Cesiomaggiore (BL).

The studies on the Claudia Augusta, a street connecting today three different countries (Italy, Austria and Germany), have highlighted the high territorial, cultural, historic and naturalistic value of the territories crossed by its path and the connection of the different lands and cultures placed in the heart of today's Europe.

The path of this road is still in some respects an enigma, given that its itinerary is not reported either by the Tabula Peutingeriana neither by other geographical maps or ancient itineraries, but some precious clues may come from some important archaeological findings. The documented historical and archaeological studies don’t support a single well-defined hypothesis on its original path yet, but assume different hypotheses on the secondary paths connected to the main street.

The Romanization of our town is attested by its coat of arms which is a rare case in the heraldry of Italian municipalities, given that since the end of the XIX century it represents a Roman temple built on the hill of San Pietro. Long and absolutely exceptional is the list of Roman artefacts that for a century and a half have come to light in our territory (just think that, for example, the coins found in the tombs of San Donato are one of the most conspicuous and interesting numismatic findings of the entire district of Belluno). The first studies of Bartolomeo Villabruna and Giuseppe Andrea Montebello date back to 1700 and illustrate an important artery of communication passing through Lamon and Tesino "... più verso Tesino, oltre San Donà, sulle sponde della Senaiga stessa evvi una strada che da quegli alpigiani appellasi tuttora Via Pagana, e di là per Tesino si deve tenere per fermo, che passasse nella Valsugana... ".
Valdeniga, Colle di San Pietro and San Donato are significant parts of the Roman settlements (fortifications, inhabited center, necropolis) along the path of the ancient imperial road which, according to the historians Alberto Alpago Novello and Luciano Bosio, passed through the territory of Lamon.

According to Alpago Novello, the street descending from Sovramonte crossed the river Cismon on a bridge just beyond Ponte Serra (presence of 2-3 meters walls on the Lamon side) and climbed through the district of Ciess to the foot of the Colle di San Pietro, on top of which stood a fortification. From Lamon to Rugna the Claudia Augusta dropped steeply to cross the beautiful bridge with a round arch that the tradition assigns to the Roman road (with probable medieval alterations). From Rugna to the hamlet of Costa the road coincides with the modern roadway, whereas up to San Donato it runs for four kilometers in parallel and slightly lower with the traditional name of "Via Pagana". Out of the bush, the road arrives in Crosere (a dialect word which means "crossroads") just next to the extraordinary necropolis investigated by systematic archaeological excavations since 2000, even if the first excavations have been conducted at the end of 1800 by the local priest Don Pietro Tiziani. About ninety graves dating back to a period between the first and fourth century AD have been discovered in this area. The excavations have brought to light a total of over 80 oval-shaped burials, all unique in their kind. The defunct are sitting huddled up with their back against the wall of the tomb and with their head facing east, according to a custom typical of the Bronze Age (from 3500 BC to 1200 BC) and therefore are very different from the normal tombs used in this Roman period. The first anthropological analyses have shown that, in the majority of cases, the remains were adults with a strong build. The grave goods, both male and female, are made up of everyday objects, clothing and ornaments in silver, bronze and glass: earrings, necklaces, fibulae and numerous Roman coins. Interesting are the silver earrings called “B”, which were chosen as the symbol of the museum due to their very particular shape, and the famous switchblade used by men in their daily work. What attracted the attention of scholars was also the discovery of the entire skeleton of an ox, whose burial carried out with particular care (the animal's head is resting on a stone that keeps it slightly raised) leads us to believe that it has been probably sacrificed. All the material is exhibited in the Archaeological Museum of Lamon.

After crossing the bottom of Val Senaiga the road developed into the municipality of Castel Tesino. Nearby was found in 1836 the Chalice of the Diacono Orso. The precious finding (it is the oldest Eucharistic chalice of the Christianized West) can be dated between the fifth and sixth centuries A.D. and is made of a large cup supported by a low stem, bearing the inscription: " DONIS OF URSUS DIACONUS SANCTO PETRO ET SANCTO PAULO OPTULIT ". Perhaps the glass came from one of the shops of Aquileia and it was lost during the Lombard invasion. Owned by the parish of Lamon, it is currently displayed at the Museo Diocesano of Feltre and it testifies the existence of ancient itineraries that have been connecting different people and cultures for more than two thousand years.